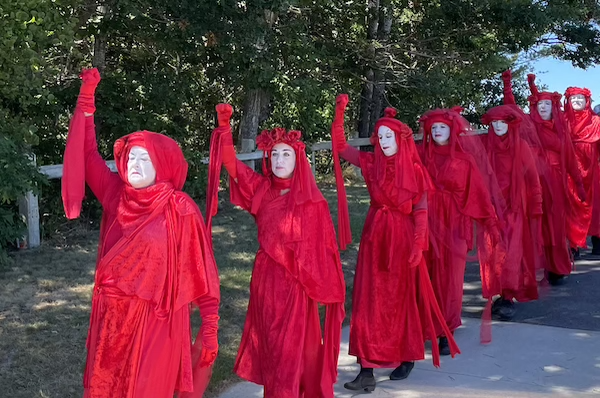 Bourne, MA — Local members of the international grassroots environmental movement, Extinction Rebellion, stood out on the Bourne Bridge today as people swarmed to the Cape to enjoy Labor Day weekend.

Climate activists held signs, banners, and artwork, highlighting the beauty of the Cape that is at risk. Maps of sea level rise, puppets of coastal animals, and banners that read messages like “Declare a climate and ecological emergency” all adorned the Bourne Bridge in a colorful spectacle. Flyers were handed out to cars stuck in Labor Day Weekend Cape traffic. There was also an appearance from the Red Rebel Brigade, a troupe of silent people in bright red robes and white-face. The red represents the blood that has been and will be lost to the climate crisis as governments around the world fail to take urgent and substantial action. Red also refers to the UN’s declaration that we’re now “Code Red for Earth’s Humanity”.

“We are here to raise awareness about the climate and ecological crisis and highlight how our beloved Cape Cod is at particular risk….,” says James Comiskey of Extinction Rebellion. “Global emissions continue to rise, in spite of countries commitment to the Paris Climate Agreement. Time is slipping away, and we need to act now in order to avert the most catastrophic consequences of the climate crisis.’”

Emissions from coal, oil and natural gas are currently following a “worst-case scenario” trajectory, according to a Woods Hole research group.¹ Worst-case consequences include multiple food crop failures, uninhabitable conditions on much of the planet, and billions of climate refugees, including US citizens. ² ³ ⁴

On August 9, 2021, the Intergovernmental Panel on Climate Change, a body of the United Nations, released a report6 that detailed five different climate scenarios that are projected to occur based upon how quickly we curb global carbon emissions. In all five pathways, the “very likely” temperature range exceeded 1.5°C by mid-century, with the best estimate being that 1.5°C of warming will occur by 2040.6 Staying below 1.5°C of human-caused warming is considered the ‘safe-zone’ by climate scientists. Since we have waited so long to act, 1.5°C of warming is expected even if we assume the safest scenario of very low emissions and net negative emissions by mid-century, a scenario far out of reach based on current trends.

The IPCC press release on August 9th says, “…unless there are immediate, rapid and large-scale reductions in greenhouse gas emissions, limiting warming to close to 1.5°C or even 2°C will be beyond reach.”7 Climate scientists unequivocally warn that the effects of the climate crisis become catastrophic to social order and safety once we surpass 1.5°C of warming. This new report puts the projected temperature range, based on current conditions and emission levels, between 2°C and 4°C by the end of the century. Because the effects of the climate crisis worsen at higher degrees of warming, and increase our chances of hitting climate tipping points which would trigger unstoppable runaway global heating, scientists reiterate the dire need to limit warming by staying on safest possible pathway. The public was concerned even before the recent IPCC report. In a statewide poll released last in 2020, 69 percent of Massachusetts residents say that Massachusetts needs to change its climate policy and 79 percent say that climate change will be a serious problem if left unaddressed.8

Cape Cod is at particular risk from the climate and ecological crisis. Glacial ice melt will flood coastal communities as sea levels rise, toxic algae blooms will become increasingly common as temperatures increase, and sharks will come closer to the shore as oceans warm and disrupt the normal patterns for marine life.⁶ The Cape is also in the position to utilize tidal and wind power in a way that other areas in the Northeast can’t, but renewable energy urgently needs to be implemented across the globe in order to avert what climate scientists label an “uninhabitable hothouse Earth.” ⁷ ⁸

Extinction Rebellion is an international climate movement that utilizes nonviolent civil disobedience and protest tactics to compel government action in order to avert climate and ecological breakdown. The group calls for a rapid transition away from an energy system reliant on fossil fuels to renewable, zero  emission, sources of energy. They demand that the governments  and media around the globe tell the scientific truth to the people, with both urgency and frequency. Because the group criticizes the government’s “criminal inaction on the climate crisis” and distrusts them to transition away from fossil fuels with enough urgency, they demand that the public be included in the process via Citizen’s Assemblies, a randomly selected body of citizens that would deliberate and decide on important issues that have been effectively utilized in other parts of the world.

Extinction Rebellion Massachusetts is an autonomous chapter of the international grassroots movement, Extinction Rebellion (XR), which started in London in 2018. The purpose of XR is to tell the truth about how dire the ecological and climate crisis is and spark immediate action in order to prevent complete climate and ecological collapse. We aim to mobilize people around the world to utilize nonviolent direct action to demand that governments take radical action to avert societal collapse caused by widespread climate and ecological disaster, and to protect front-line communities, biodiversity, and the natural world. This movement is non-political, and unites all of humanity behind a singular goal of a just and livable future. Learn more at: xrmass.org